The speed recorded by the Fenix appears 2.37 min/100m which is 2.3 km/h which is also to low since I swim about 3.2 km/h. Makes sense, since the speed is derived from the distance.

Note that I attached both watches to my swimming buoy (20 cm distance between them) for better satellite signal reception. They were above water all the time with a clear 180/360 degree sky view. 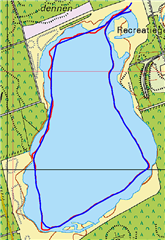 In red the TomTom, in blue the Fenix.

On close analysis the FIT file contains 1053 erronous [lat, lon] coordinates [180, 180]. This cannot be due to poor satellite reception since the watch was on top of the buoy giving it a 180 degrees sky view 360 degrees around (the best you can get).

Note that in the conversion to GPX format, I filtered the [180, 180] coordinates out.

I checked another Open water Swimming activity in which I compared the TomTom (on buoy) and Fenix 7 (on wrist).