There is a software update available for my Varia RTL510, but I am unable to install it.

Here's what shows on my Edge 830 to begin with: 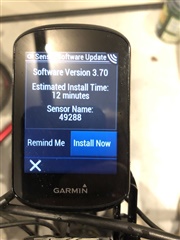 If I tap on 'Install Now', it initially shows this: 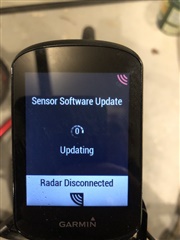 The dots around the central number rotate, and the number increases. Eventually, I get to this: 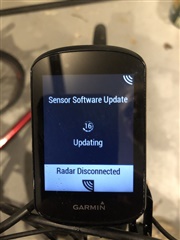 Then nothing further happens, though the dots continue rotating indefinitely.

If I tap on the screen, I get this: 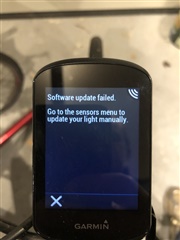 I can go to the sensors menu and try again, but the same behaviour repeats over and over again.

The device works normally in other respects - connects to the Edge 830, shows approaching cars on the display, flashes the light at the car, etc, etc.

My Edge 830 software is fully up to date.

I have tried updating via Garmin Express on my Mac, but that doesn't work either.