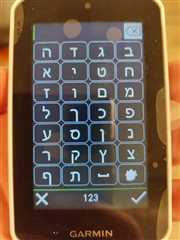 This is the current Hebrew keyboard on Edge Explore 2 version 6.05.

1. The 1st problem with this is that it tries to be in alphabetic order, except that I guess it was created for a bigger screen that would fit 5 keys in a row. The reason I think that's what happened is that the current keyboard "translated" to English looks like:

I know this looks very confusing, it's because Hebrew is right-to-left.

If you reorder the keys in 5 columns then it becomes clear what's causing the bug:

2. There's one letter, the Hebrew SHIN (ש) (in the English letters that would be Z) that is totally missing.  I Used "@" for the last letter that should be after Z.

Well maybe it's not totally missing, I used "*" for the bottom-right key. It is unclear what it is supposed to be. After closer inspection it looks like it is both the missing ש (Z) and also some arrow that is pointing up. However nothing happens when I click on it, so it's a "dead key".

3. Note the last row has another but smaller issue: it's a mix of RTL and LTR characters. IMHO the correct display should be:  _ @ Z because the last 2 letters of the Hebrew alphabet should be on the right side, and then the rest. But again this is less of a problem so long the order of the Hebrew letters is