Inconsistent Trail Size on Fenix 7 Map compared to the 955

On the Fenix 7S Sapphire Solar, some trails are narrower than normal and can be difficult to see. This happens on multiple zoom levels (I usually use 200ft or 300ft when running).

I added an image with an example and compared it side by side to the same trail on the Forerunner 955 Solar. The trail directly to the left of the crosshair is significantly narrower and almost looks like a contour line instead of a trail. The Forerunner 955 Solar does not have this issue, as all of the trails are the same size. On both watches, the map settings are identical for the activity and are set to High Contrast map theme and High Detail with all default map layers enabled. Both watches have the TopoActive North America map version 2022.10. 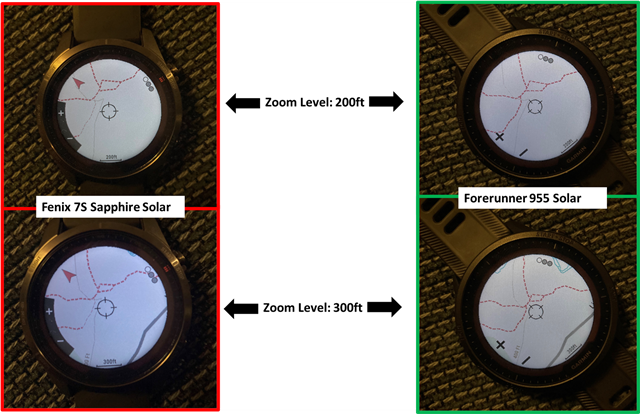 1) Is this a common issue? I already reinstalled all the maps on the F7 when it was plugged in to my laptop with Garmin Express, but it did not fix the issue. I also tried using different map themes and detail levels. The software version for the watch is 10.43.

2) I also noticed in the Configure Maps menu within the activity settings that there are no DEM maps listed (unlike the 955, which does have the DEM maps listed). Does this have any impact?