Today I was exploring my Forerunner 245 system files on Windows, and saw a folder named "TEXT". It contains the language files.

I opened the Spanish file (that's my language), and wonderer if I could change some lines to customize and optimize the messages and texts shown on my watch.

I'm trying to edit the texts because there's some ones that are not optimized for a small screen. Spanish language usually has longer words than the English's.

For example, when using Running Dynamics Metrics, for "GCT Balance" (Ground Contact Time Balance) the watch shows "EQ. TI. CO. SU." (EQuilibrio de TIempo de COntacto con el SUelo). As you can see, the Spanish words are much larger and I don't like some of the translation used by Garmin. I want to change "EQ. TI. CO. SU." to "Balance TCS". I think it would be a much better translation and it would be better optimized on a small screen, specially when running or cycling because you only take a glance at it.

I changed  the text "Iluminación" to "Linterna" (Flashlight) on the controls menu, and it worked fine. I chose that simple feature to try to avoid errors while training. I don't want to be running and cause an error because of a text line not recognized by the watch, and lose my workout session.

Here's the text I changed. 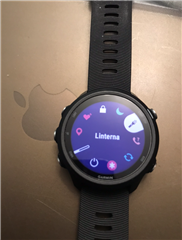 And here's the text successfully changed

I did a backup of the original file for safety.

So, my questions are: Has anybody done it? If you did it, did you have any problem? Do you think that  my assumption is correct?