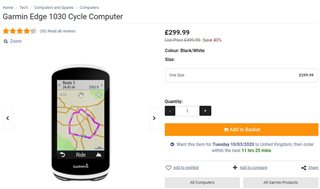 I wonder if Garmin are close to releasing / announcing the next model which i have read online as 1030 Plus.