Wearables
fēnix 5 series Projected Elevation profile when navigating a route MAYBE FIXED (Was a bug between v 7.10 and 21.0)
Related

Projected Elevation profile when navigating a route MAYBE FIXED (Was a bug between v 7.10 and 21.0) 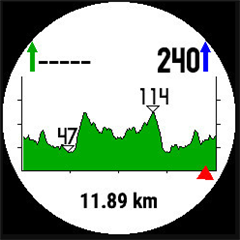 On my Fenix 5x I noticed a very strange thing when looking at the 'projected' elevation plot when navigating from point A to point B in a straight line rather than following roads or tracks. Not a closed route. (i.e. point B is 11 km from point A in a straight line) Version of the software on the Fenix 5x is 7.10 and the maps involved are Aus and NZ Tope lite V5 and Garmin Cycle Aus/NZ 2016.0. Both maps are turned on in the navigation settings. Navigation setting for routing is set to 'direct'. (Although note that it also does something similar if I set it to Pedestrian, or Mountaineer or one of the other choices)

So, just to clarify, I am talking about the profile that is calculated for the projected route, not the route travelled already. i.e. this is what the navigation sw is telling you you will go up and down if you walk in this straight line from where you are to where you want to be. What an excellent tool this would be IF ONLY IT WORKED PROPERLY!

The elevation plot looks strangely symmetrical. In fact it looks like the elevation plot I would expect, but doubled and reflected around point B as if it is the plot for A->B->A again rather than just A->B
.
Above is a picture, and I assure you that the real elevation between A and B should not be symmetrical like that. It's showing as green not blue because I haven't hit the 'start button yet. Starting doesn't change the shape of the graph, though as I hike along the route, the elevation profile changes from blue to green and corrects itself until at the end it looks about right.

I have also seen similar strangeness when looking at elevation plot for routes that follow roads and tracks out in the bush whilst hiking, though I don't recall them being symmetrical, they were definitely wrong and overshot the destination by about a factor of 2 as well. Drove me crazy trying to work out what it was doing!

This doesn't always happen. Sometimes abandoning the navigation and starting again gets the correct elevation plot, but very often it doesn't. More often than not it is wrong.

I haven't noticed this on closed routes that I have recorded, i.e. ones that come back to their beginning.

Anyone else noticed this problem, or is it just me, or maybe the particular maps or settings I have chosen?