One issue that still exists in firmware 5.0 (it existed in previous versions as well) that makes difficult to use map when stopped during activity recording is that orange frame displayed on the screen (indicating pause state) overlaps Graphics scale bar displayed in bottom right corner. It is then difficult to judge distance on the map. See image illustrating this issue. 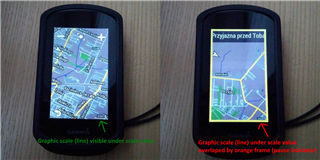 I treat it as a bug (at least functional bug) and I would like to see it fixed by Garmin in next version. Do You face the same issue and support me?