I've got a battery drain issue with my fenix 5+. They were not in use for the last 2 months. After powering up, updating (to SW 11.00) and charging the battery life became completely disastrous. In smartwatch mode it consumed aroud 0.4..0.5% per hour. But after first outdoor activity with GPS it started to burn the power like demon. Average consumption ranged from 1.5% to 2% per hour and never less. I tried rebooting and soft reset; this helped until the first GPS activity. After that the power drain returned to the extra level. All external sensors (including wrist HR) were turned off. Moreover, I've tried the beta SW (11.73) - nothing new: after resetting everything looks fine till the first GPS connect.

I love my watches, but the power drain is far off the specification and dissapointes me. I see that without any sport activity battery works well and could hold the charge up to 8..9 days. But it doesn't fit me.
Do you have any idea how to troubleshoot this?

PS: I tried to fully discharge and recharge the battery to recalibrate the circuits.

Thank you in advance. 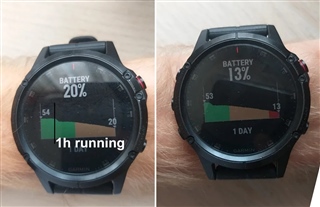